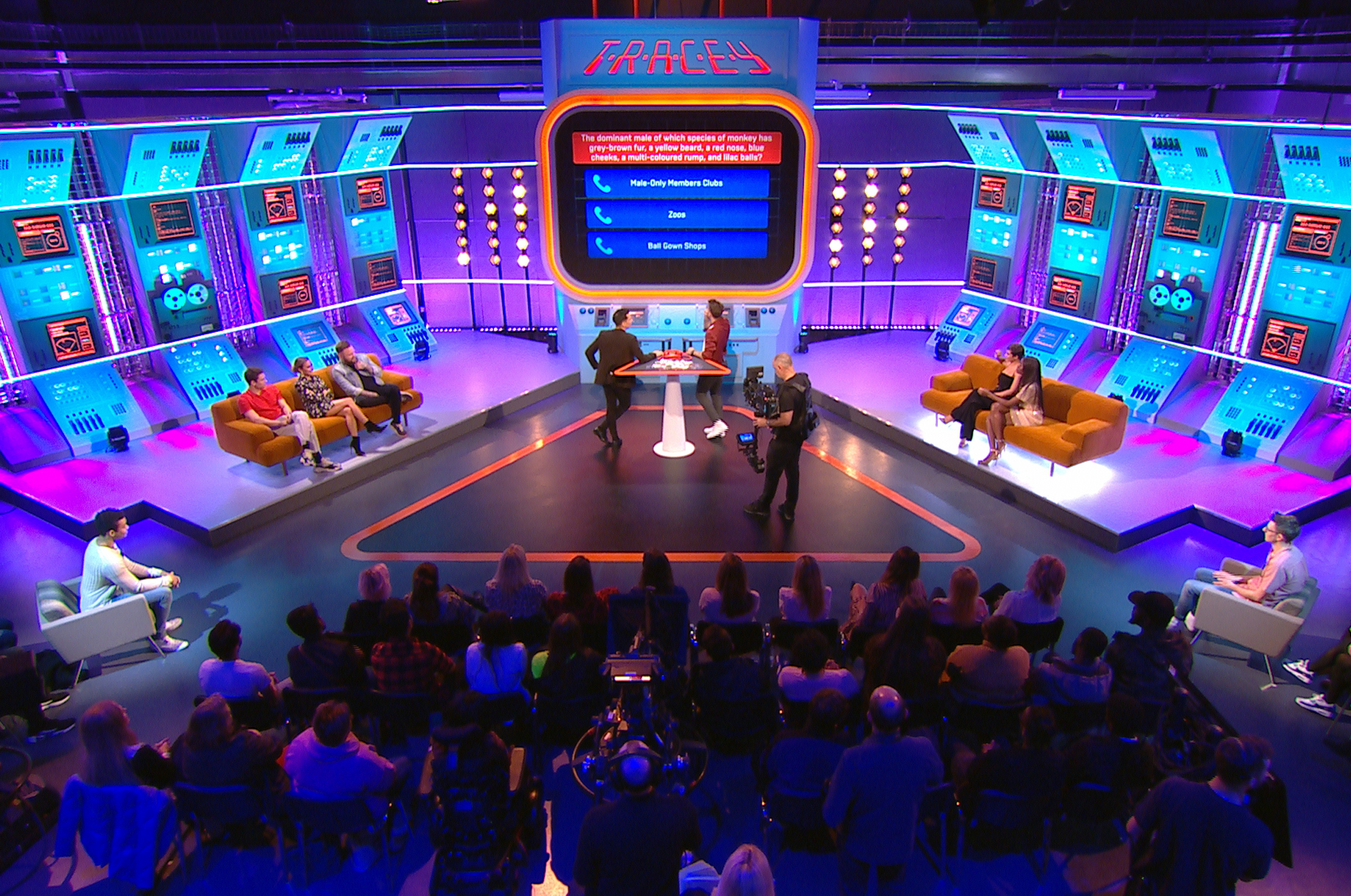 Hey Tracey! is a brand-new quiz show for ITV2, hosted by Joel Dommett, where celebrities play to win cash for members of the public… with some unpredictable consequences. In real life if you don’t know the answer to a question you can ask Siri or Alexa… in this show, unfortunately you’re stuck with Tracey, a cyber assistant with a twist. This unique show needed vibrant lighting covering the full colour spectrum to really emphasize the changing mood, and lighting designer Roger Williams knew the LEDJ Pixel Storm 12 Quad MKII battens would the perfect match for the job.

Having used the Pixel Storm 12 Quad MKII battens on previous shows, Roger knew how these pixel mappable fixtures would not only provide smooth colour mixing for the changing atmosphere but would also make superb wall washers and cover larger areas due to their ellipsoidal beam angle.

The Pixel Storm 12 Quad MKII battens from LEDJ also have a 3000Hz refresh rate, ideal for studios and TV applications where flicker-free operation is essential! The fixtures are also extremely versatile with end and central brackets for multiple rigging or floor standing applications. They also come supplied with an eyebrow to reduce glare and hide the LEDs when uplighting.

The idea behind the quiz show is if the celebrities don’t know the answer to Joel’s unusual questions, they can say “Hey Tracey!” and enlist the help of his very own virtual assistant. But forget your high-end Silicon Valley artificial intelligence – Tracey was thrown together by some sixth formers in the late 90’s as part of their technology coursework… and she can usually be found tucking into a pie or painting her nails.

Each time the celebs summon her help, Tracey can connect them with someone in the real world that might be able to help. Less phone-a-friend, more like comedy cold calling. And that means everyone from dog groomers to massage parlours, piano tuners to equine dentists, roadside burger vans to reptile houses. So, if the celebrities want to win big, they’d better make sure they say… “Hey Tracey!”

More from the lighting designer…

Roger Williams, Lighting Designer for the show said, “I was asked to light a new ITV2 show called ‘Hey Tracey!’, filmed at BT sport studios, a new space for a mainstream entertainment show. The original discussions were based on the set being black, but after seeing the space I suggested that they use grey studio walls as a backdrop to allow me to change the colour of the background giving more depth and different looks.”

Roger had recently purchased a large quantity of Pixel Storm 12 MKII fixtures and knew these would be ideal for the set, and when projected on the grey backdrops they truly showcased the vibrancy of the colours that can be created. He added “The battens were perfect, their 10 x 45° beam angle gave a lovely even wash up the walls and the quad-colour LEDs gave a rich variety of colours which worked so well with the set, making the whole look really vibrant… Fingers crossed for series 2.”

We also have our new HEX version available which Roger has mentioned he is definitely interested in taking a look at for future projects. For more information on the LEDJ Pixel Storm 12 range click here.